Giardia in Dogs Is Caused By a Intestinal Parasite Protozoa

Giardia in dogs can be a very distressing experience for both dogs and human caregivers. Giardiasis is a parasitic intestinal infection caused by the Giardia Lamblia protozoa. It is a waterborne parasitic protozoa. It is not a worm. 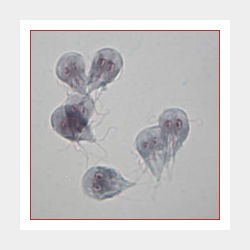 Protozoa are single celled organisms. The Giardia protozoa are commonly found in the intestines of animals, including dogs.

They are flagellates. Flagellates have hair like tendrils hanging down that act as legs to help them move and ' swim '. Those little things that look like eyes, are actually nuclei. The Giardia protozoa multiplies by dividing in two, thus the two nuclei. Clever  parasites. Yes or yes?

Giardia can be very hard to detect in stool samples and even harder to get rid of.

I would be a rich woman if I had a dollar for every person who has contacted me to say that their dog has recurring diarrhea. More often than not, this is related to a Giardia infection. Often Giardia in dogs goes undetected for a long time. When it is finally diagnosed, the infection is severe and damage has been done to the intestinal wall.

Next to skin problems, diarrhea in dogs is the most common complaint I get, and diarrhea is often caused by the Giardia Lamblia protozoa. There are several subspecies of Giardia but each one has a life cycle and a specific way of transmitting itself to another animal, in order to multiply.

Unfortunately, Giardia can be passed on from one dog to another, and humans can be infected by Giardia, too. So make sure you wash your hands. Giardia is easily spread from dog to dog and is often a problem in households with multiple dogs. Giardia is common in puppies born to mothers who have this annoying parasite protozoa.

Why Do Dogs Get Giardia Lamblia?

If a dog comes in contact with Giardia and does not have a strong immune system, it will be unable to resist the infection. The severity of the infection depends on the overall health of the dog. Healthy dogs are more able to naturally control the presence of the Giardia parasite in the intestinal environment.

In North America, infection of Giardia in dogs is reported to be about 8%. The rate of infection in puppies is much higher at about 36% to 50%. Dogs in shelters and kennels are very much more at risk. Giardia in dogs in confined enclosed environments can be as high as 100%.

How Do Dogs Get Giardia?

Once your dog has ingested the cysts, they now have the opportunity to travel through the digestive system and break open in the intestines. There, the Giardia  feed and multiply.

Giardia in Dogs Has Two Stages of Development

Does Your Dog Have These Giardia Symptoms ?

Some experts see excessive grass eating as a symptom, because eating grass will often make a dog purge, either by vomiting or by prompting stool elimination.

Some experts point to stool eating ( copraphagia ) as a symptom of Giardiasis in dogs because the infected dog will attempt to regain nutrients and bacteria lost through diarrhea.

Just because you receive a negative result, does not rule out that your dog may have Giardiasis. Trust me, I know about this! You can read about my dog Jack, below. 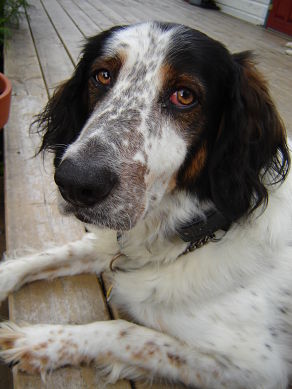 My dog Jack, who actually had Giardia for the first seven years of his life, would show symptoms on and off, but my vet was never able to pinpoint this problem.

Jack had a problem with intermittent bouts of diarrhea as a puppy, and the problem continued into adult dog-hood. Jack couldn't gain weight. About every three weeks or so, he would have loose, smelly, mucousy stools, sometimes with bloody diarrhea, urgent bowel movements and occasional vomiting. This went on for years.

You can imagine how much I worried about him, but no positive results for Giardia were found until many years later. Finally, Giardia was diagnosed, but Jack did not respond to conventional treatment.

The most commonly used drug is Metronidazole ( Flagyl ) which is an antibiotic/anti protozoal drug. This drug can be used alone, or in combination with other drugs such as Panacur.

Often the drugs used to treat Giardia in dogs are not 100% effective and have the potential to upset the gut microbiome and even cause liver damage, as well as other dangerous and unpleasant side effects.

Since conventional medications have so many side effects, and are not really as effective as they should be for this problem of Giardia in dogs, natural remedies are a good alternative to conventional Giardia treatment, but they will take longer to work.

I suggest a gentle parasite cleanse for dogs once or twice a year, whether your dog has Giardia, or not.

Giardia in dogs can be a very distressing problem for both dogs and human caregivers. Having been through this dog health problem, I know how hard it is. You can enter your email above, to learn more about my natural remedy suggestions for Giardia, and get help for this confusing difficult parasite. 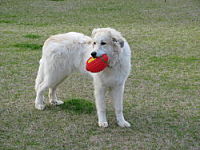 Hoss is a Great Pyrenes dog who suffered from Giardia. With the use of his natural remedies for Giardia, Hoss recovered.

My sweet Jack sleeping in a dog bed that's too small for him. Oh well, he's comfortable!

My dog Jack lived with undiagnosed Giardia in dogs for 7 years.

With natural remedies for Giardia  he recovered. After that, Jack lived a long and healthy life giardia free.

Jack passed over the Rainbow Bridge at almost 20 years of age. Love you forever, Jack! 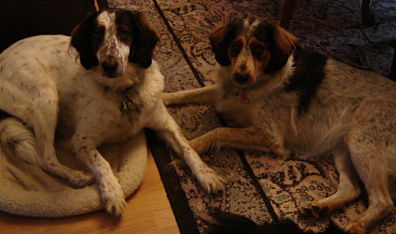 Here's Jack on the left with his sister, Rosie.

Both dogs had recurring bouts of intermittent diarrhea for years. Rosie died early at only 5 years of age. I never found out if she had Giardia, but I suspect she did, since both brother and sister suffered from the same symptoms.

If I had only known then, what I know now! 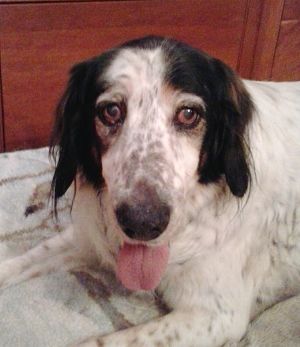 Here's my sweet, old Jack shortly before he left me at almost 20 years of age.

When I finally discovered Jack was suffering from giardia which went undiagnosed for 7 years, I used natural remedies to help Jack recover.

I am so grateful Jack recovered from Giardiasis and went on to live a healthy long life, Giardia free.